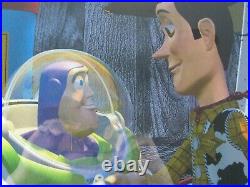 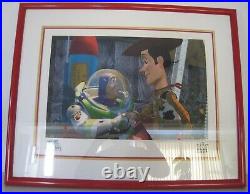 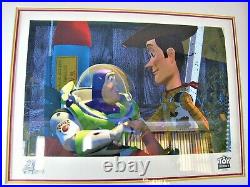 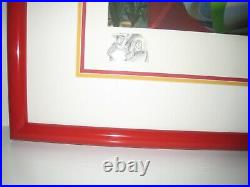 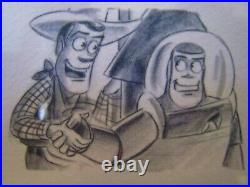 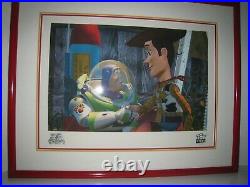 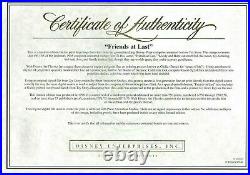 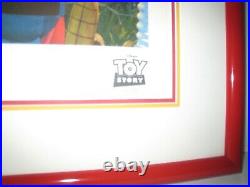 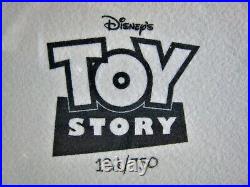 This is a limited-edition Giclee print depicting characters from the groundbreaking Disney-Pixar computer-animated feature Toy Story. This image recreates shot t36_065 of the landmark 1995 computer-animated film. In this scene, Friends at Last, Woody and Buzz outsmart Sid the mean, toy-torturing kid next door, and finally realize that, though they are worlds apart, they make a pretty good team.

Walt Disney Art Classics has created these character images using the fine art printing process known as Giclee (French for spray of ink). Using an enhanced digital ink jet printer specially modified for fine art reproduction, Kolibri Art Studio of Torrance, California took computer-based digital files and printed them onto premium-quality, acid-free paper which was later hand deckled. Using an original digital file from Toy Story created by Pixar Animation Studios, this process creates a first-generation fine art print directly from the digital source exactly the way the same digital source is used to output from the computer to the motion picture film. As a special embellishment, Friends at Last also includes a Giclee-printed storyboard sketch from Toy Story, illustrating how the scene was conceived in the production of the film, and a printed Toy Story logo as the seal.

Walt Disney Art Classics approves the techniques used in the production of this edition and the proofs thereof. The original digital file used to create the print is archived Pixar Animation Studios. There are no signed impressions in this edition. No additional multiples of this image, including proofs, have been produced in this or any other limited edition.

This is to certify that all information and the statements contained herein are true and correct. Characters Featured: Buzz Lightyear and Woody the Sheriff.

This item is in the category "Collectibles\Disneyana\Contemporary (1968-Now)\Animation Art, Cels". The seller is "cagneyrainst-99" and is located in Milford, Connecticut. This item can be shipped to United States, Canada, Mexico, Bermuda.