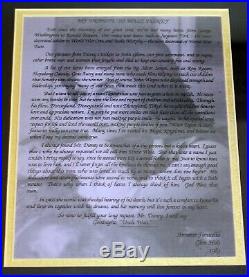 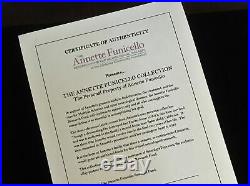 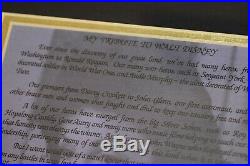 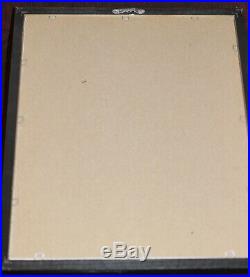 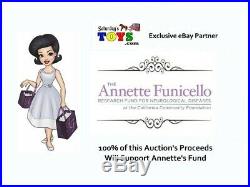 Description: Annette Funicello (1942 - 2013) is pictured with the text of "My Tribute to Walt Disney" as written by Annette with her husband, Glen Holt, in 1983. The document measures 8.5" x 11" and was printed on a light purple stock (a favorite color) to express her sincere appreciation for all that Walt Disney had meant not only to her, but to people in every land throughout the world.

It was last displayed in the hallway that led to Annette's bedroom in her Bakersfield home. The full display measures 12" x 15".

The document was placed behind a double black and gold mat and displayed in a simple black wooden frame at both her Encino (thru 2011) and Bakersfield homes. It remained in the gallery of her Bakersfield home until the passing of her husband in February 2018. It can be noted that the reflection in the glass is that of an American flag; an inadvertent but not surprising development from when the photos were captured for this listing. There are a couple of minor errors noted in the text that were later corrected when Annette presented "My Tribute" for the last time at the 1993 Official Disneyana Convention at the Disneyland Hotel in Anaheim. First, the name of Davy Crockett is referenced as "Davey"...

Those things aside, the document beautifully expresses her personal gratitude for Mr. And concludes with her heartfelt tribute to "Uncle Walt".. Annette's original 1984 recording of the tribute (from her Nashville sessions) remained unpublished until it was released on CD in 2013 shortly after Annette's passing.

Provenance: As found in Annette's personal photo gallery at her Bakersfield home. Includes Certificate of Authenticity from The Annette Funicello Research Fund. Annette Funicello and Glen Holt were married on May 3, 1986 and together in 1993 they founded the Annette Funicello Research Fund for Neurological Diseases for the purpose of researching the cause, the treatment and the cure for Multiple Sclerosis and other neurological diseases. As Annette's disease progressed, she and Glen had redoubled their efforts to fund the critical research that is needed to fight all neurological diseases, including multiple sclerosis, the disease that Annette had so valiantly fought for more than two decades. Their relentless struggle against the disease served as an inspiration that can motivate Annette's friends and fans to participate in providing the financial support that this ongoing research requires.

Glen faithfully cared for Annette until her passing on April 8, 2013. After Glen's passing on February 12, 2018, the Research Fund's Board of Directors stepped forward to carry on the work begun by Annette and Glen more than a quarter-century ago. In support of Annette's final wishes, 100% of the proceeds from her personal property will be used to support the continuing work of the Annette Funicello Research Fund for Neurological Diseases. The Annette Funicello Research Fund is honored with the generosity of The Walt Disney Company in re-naming the Walt Disney Studio's historic Stage 1 sound stage on June 24, 2013, forever more to be known as The Annette Funicello Stage. Company president Robert Iger shared these personal thoughts in remembering Annette Funicello. Annette was and always will be a cherished member of the Disney family, synonymous with the word Mouseketeer, and a true Disney Legend. She will forever hold a place in our hearts as one of Walt Disney's brightest stars, delighting an entire generation of baby boomers with her jubilant personality and endless talent.

Annette was well known for being as beautiful inside as she was on the outside, and she faced her physical challenges with dignity, bravery and grace. All of us at Disney join with family, friends and fans around the world in celebrating her extraordinary life. The item "Annette Funicello Personal Property 1983 My Tribute to Walt Disney Framed Text" is in sale since Tuesday, August 11, 2020. This item is in the category "Collectibles\Disneyana\Contemporary (1968-Now)\Other Disneyana". The seller is "annettefunicello" and is located in Bakersfield, California.