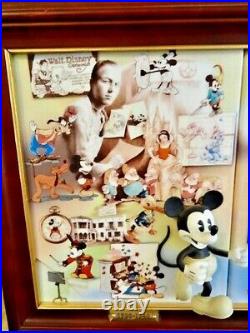 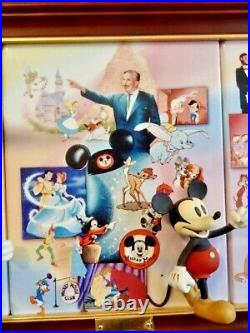 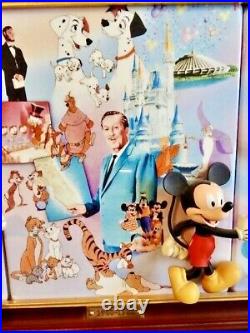 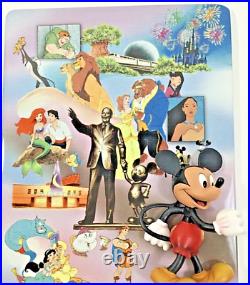 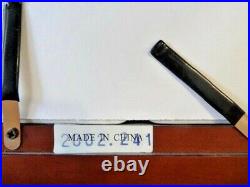 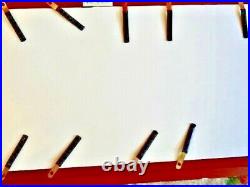 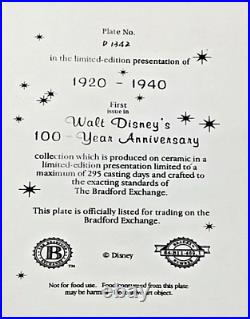 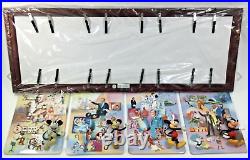 This is a special find! Each plate is numbered and is part of a Limited-Edition piece, limited to 295 casting days. The four plates represent the First through the Fourth issues. They are housed in a beautiful wooden Mahogany frame. Each plate slides into the frame and is held in by clips on the back (see pictures). The plates themselves are square and each one has a 3-D Mickey Mouse "walking" out of the picture in the bottom right-hand corner. Steamboat Willie, hand drawings of Mickey in Fantasia, Walt Disney Studios, Pluto, Goofy, and Snow White and the Seven Dwarfs. There's also a nice shot of Walt drawing. The next plate covers the period of 1940 to 1960 and has images of Bambi, Sleeping Beauty, Lady & The Tramp, Pinocchio, Alice in Wonderland, ears from The Mickey Mouse Club , Peter Pan and Cinderella. Amazing how all of those movies are as beloved today as they were then! The third plate covers events from 1960 to 1980 and includes Winnie the Pooh with Tigger, The Sword and the Stone, 101 Dalmatians, Song of the South, Chip N Dale and The Aristocats. You will also see the creation of Cinderellas Castle in Disneyland as well as Space Mountain. And Walt is showing where Disney World is on a map of Florida. The last plate shows Beauty and The Beast, Pochahontas and Mulan, Walt Disney World and Epcot Center, The Hunchback of Notre Dame, The Little Mermaid, Hercules and Aladdin. The timeframe for the last plate is 1980 to 2000.

Frame measures 10" high, is 27" wide and is 1 deep. We have many similar items in our store "Thompson's Fine Collectibles". The item "Bradford Set of Four 3D Walt Disney's 100-Year Anniversary Plates in Frame" is in sale since Sunday, March 28, 2021. This item is in the category "Collectibles\Disneyana\Contemporary (1968-Now)\Plates". The seller is "pncstom" and is located in Surprise, Arizona.