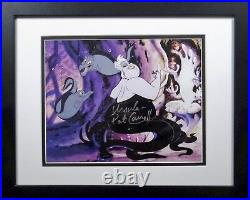 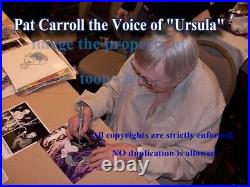 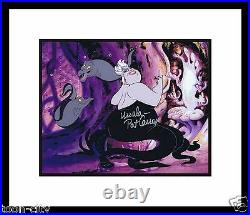 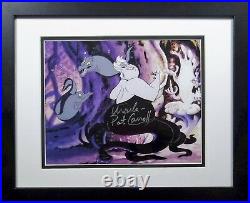 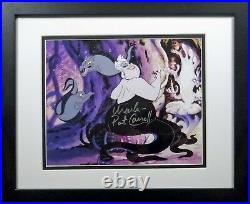 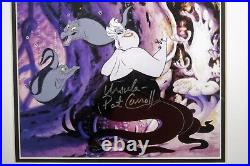 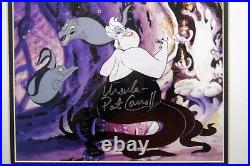 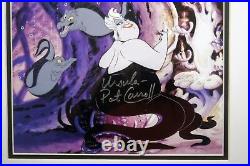 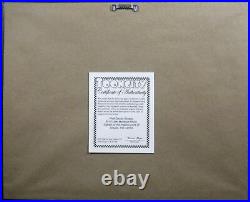 Direct from " THE LITTLE MERMAID ". This listing is for a 8 x 10 inch color photo of Ursula along with Folsom and Jetsam.

Ursula is eating one of the little souls. The image is an idea pose for this Villain, who happens to be one of Disney's most EVIL creations. Pat signed in a Silver Sharpie Paint Pen signing it Ursula - Pat Carroll. Piece comes with a Certificate of Authenticity. ALL NEW frame, double matted in Museum Quality Rag-Matt materials.

Framed Size is 12x15 inches. All Top of the line, your piece will be preserved forever. (born May 5, 1927 in Shreveport, Louisiana) is an Emmy Award-winning American actress. She has appeared in many TV programs beginning in the 1950s (playing Cindy Williams' mother on Laverne and Shirley, for example) and stage productions, but is known for her roles as the voice of Ursula in The Little Mermaid and the voice of Morgana, Ursula's sister in The Little Mermaid II: Return to the Sea. Pat will also be doing Ursula in the upcoming The Little Mermaid III which is due to come out in 2007. In 1956, Carroll won an Emmy Award for her work on Caesar's Hour and was a regular on the sitcom Make Room for Daddy. She appeared on many variety shows of the 1950s and 1960s, such as The Red Buttons Show, The Danny Kaye Show, The Red Skelton Show, and The Carol Burnett Show. In 1965, she co-starred as Prunella, one of the stepsisters in the Rodgers and Hammerstein's Cinderella television special starring Lesley Ann Warren. Carroll scored a personal and artistic success in the late 1970s with her one woman show on Gertrude Stein titled Gertrude Stein, Gertrude Stein, Gertrude Stein winning several major theater awards and even a Grammy in 1981 for her recorded version of the performance. Since the late 1980s she has done much voice over work on animated programs such as A Pup Named Scooby Doo, Galaxy High, and A Goofy Movie. On Pound Puppies she play the series villain, Katrina Stoneheart on the Hanna Barbera version of their TV show.

On two Garfield television specials (A Garfield Christmas and Garfield's Thanksgiving), she voiced Jon's feisty Grandma. She has portrayed the sea witch Ursula in many forms of media, such as the Kingdom Hearts series of video games, the Fantasmic! Show at two Disney theme parks, the spin-off TV series and will soon voice the Ursula puppet in the forthcoming Broadway production of the movie.

She provided the voice of Ursula once again for the puppet in Disneyland's Parade of Dreams. This item is in the category "Collectibles\Animation Art & Merchandise\Animation Art". The seller is "toon-city" and is located in this country: US.