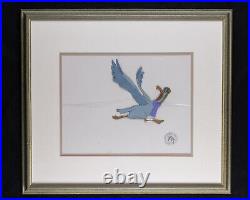 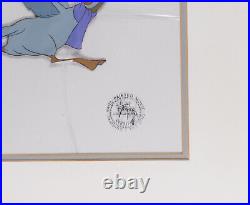 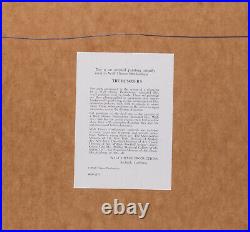 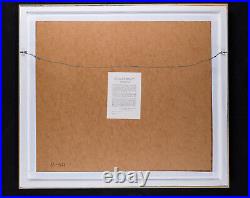 Disneyoriginal animation cell original The Rescuers - Orville - 1977. This original, one of a kind, hand-painted production cell and certified by Walt Disney Productions, is the actual cell that was used in the movie and features Orville, the albatross who gives Bernard and Bianca a ride to Devil's Bayou.

Cell is professionally wood framed with archival materials double matted and measures 21 X 24 inches. The Disney Productions certification and initialed seal is pressed onto the lower right side of the cell. The cell has rarely been displayed and has NOT been exposed to prolonged light. Frame is in very good shape. Item comes from a smoke-free environment. I have three other Rescuers cells listed. Please carefully view all photos.

No visible damage or issues with the cell. If you have specific questions or want additional photos, please let me know.

The Rescuers is a 1977 American animated adventure filmproduced by Walt Disney Productions and released by Buena Vista Distribution. The 23rd Disney animated feature film is about the Rescue Aid Society, aninternational mouse organization headquartered in New York City and shadowingthe United Nations, dedicated to helping abduction victims around the world atlarge. Two of these mice, jittery janitor Bernard (Bob Newhart) and hisco-agent, the elegant Miss Bianca (Eva Gabor), set out to rescue Penny(Michelle Stacy), an orphan girl being held prisoner in the Devil's Bayou bytreasure huntress Madame Medusa (Geraldine Page). The film is based on a seriesof books by Margery Sharp, most notably The Rescuers and Miss Bianca. (Bob Newhart) the male protagonist.

He isthe Rescue Aid Society's timid janitor and a male grey mouse, who reluctantlytags along with Miss Bianca on her journey to the Devil's Bayou to rescuePenny. It is after then that he is no longer the janitor, but a fellowdelegate. He is highly superstitious and dislikes flying. Evinrude is a dragonfly who is stated to own the fastestboat in Devil's Bayou.

The mission to rescue Penny could not have beensuccessful without the help of Evinrude. Madame Medusa is a greedy, redheaded, wicked pawnshopowner.

Upon discovering the Devil's Eye diamond hidden in a blowhole, she kidnapsthe small orphan, Penny, to retrieve it for her, as Penny is the only one smallenough to fit in it. In the end, she is thwarted and presumably eaten by hertwo alligators, Brutus and Nero. (Jim Jordan) an albatross who gives Bernardand Bianca a ride to Devil's Bayou. The role was the last for Jordan, whoretired after the film's release.

This film marked the last joint effort by veterans MiltKahl, Ollie Johnston, and Frank Thomas, and the first Disney film worked on byDon Bluth as a directing animator, instead of an assistant animator. Other animators who stepped up during production were Glen Keane, Ron Clements, and Andy Gaskill, who would all play an important role in the DisneyRenaissance. This item is in the category "Collectibles\Animation Art & Merchandise\Animation Art". The seller is "fotoartone" and is located in this country: US. This item can be shipped to United States.