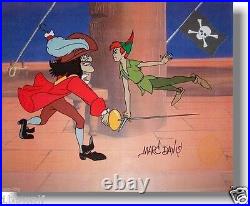 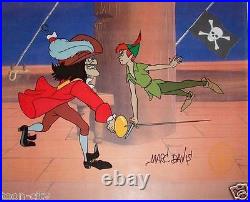 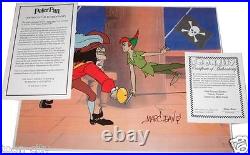 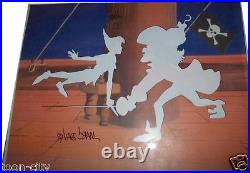 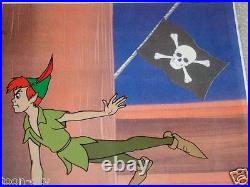 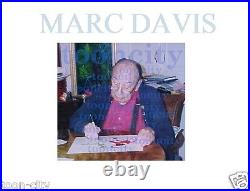 "Peter Pan Duels with Captain Hook" Sericel signed by MARC DAVIS. Taken from a scene out of the ending of the 1953 animated feature "PETER PAN" From the "Dueling on the Jolly Roger" scene in the movie. Gold seal Disney sericel is Signed by Marc Davis.

Cel size is 14 x 11 inches. We have enhanced this piece with a FREE Complimentary Color Background. During the 1980s it was customary for Disney to release it's sericels without backgrounds.

Artwork was simply framed over a white matting background. Toon-city has gone to the extra effort to have an artist re-create a background-painting from which Color reproductions are created. Purchaser has the option to display their artwork with or without the FREE color printed background as they are only paying for the cel. Backgrounds are NOT for sale separately. This cel is signed by Marc Davis, who is one of Walt's GREATEST Animators. Marc is a historic animator, who is renown for contributions to the Disney style, we all know and love. Marc's Disney career started in the 1930's on Snow White and the Seven Dwarfs. Signature's will vary slightly, as no two autographs can be identical. This listing is for one sericel, 2 Certificates of Authenticity and a Free Complimentary background. Is a serigraphy process that involves silk-screening each individual color to the cel, one at a time. Every distinct shade is a separate screen, and a separate pass in the procedure. As a result of this fine art operation, each color is flawlessly reproduced.

Sericels are also created in limited quantities, typically 2500 to 5000 pieces and sometimes even 9500. Because of their larger edition size, sericels are the most affordable type of animation art, ideal for the beginning collector. The word Sericel is a contraction of Seri-graphed Cel. Marc is one of a limited number of Premiere Disney Animators.

Walt Disney called them his nine-old-men. Which is a comment towards their wisdom and creativity because he trusted them with all of the animation as he got involved in other projects. Marc's career at the Disney Company encompasses 50 years of creativity. As a Feature Animator starting in the 1930's he developed the characters of Snow White and Bambi & Thumper.

During the 1940's he became the man to goto when drawing female characters such as Alice and Cinderella. In the 1950's he drew Tinker bell for Peter Pan.

He finished his animation career at Disney by Briar Rose & Maleficent for Sleeping Beauty. After retiring from feature Animation in the 1960s he moved over to WED (Walter Elias Disney) imagineering which was the division in charge of creating all of the Disney theme park attractions. He used his artistic talents to integrate his animation skills into the physical world. He was integral in creating and developing Disneyland attractions like the Pirate robots in Pirates of the Caribbean & Ghosts in The Haunted Mansion with their Audio Animatronics. Some Sericels are labeled as Seri-graphed cels.

A Sericel is a serigraphy process that involves silk-screening each individual color to the cel, one at a time. This item is in the category "Collectibles\Animation Art & Merchandise\Animation Art".