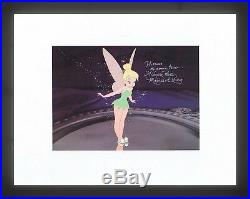 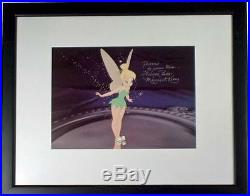 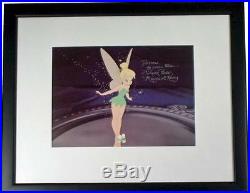 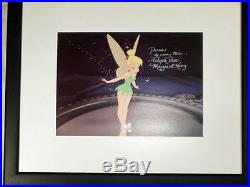 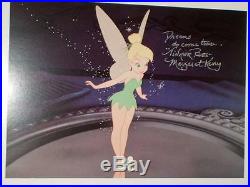 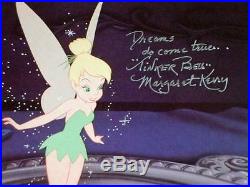 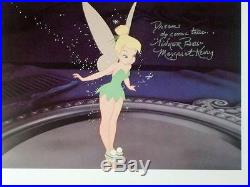 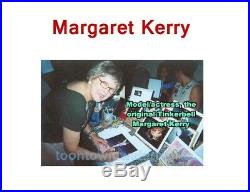 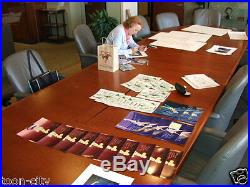 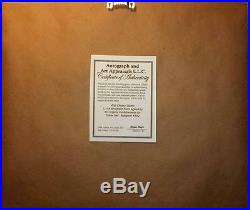 This Beautiful image has been signed by the ORIGINAL actress/model used by the animator Marc Davis. This 11 x 14 inch Disney created lithograph has been.

BONUS: All Hand Signed "Dreams Do Come True Margaret Kerry Tinker Bell". Tink admires her figure on the mirror. Classic scene from the 1953 feature Peter Pan. Signature is Original and by her hand (NO Reprints).

Piece is in pristine condition and would make a wonderful gift for encouraging any person to fly free and enjoy life. Comes with the Certificate of Authenticity.

Very classy and perfect for our little Pixie. Finished off with Brown Dust-paper backing and a metal hanger.

This piece is ready to hang out of the box. Tink is the iconic symbol of Disneyland. She is international known as the ambassador for Disneyland and Walt Disney World in Florida along with Disney MGM Studios. The image is from a classic scene performed by Margaret in pantomime for Animator Marc Davis.

We are experts in dealing with Disney American animation cel art. Piece is NOT a cel, cell or sericel. BIO: Margaret Kerry (born Peggy Lynch, circa 1930, Los Angeles) is an American actress, motivational speaker and radio host best known for her 1953 work as the model for Tinker Bell in the Walt Disney Pictures animated feature, Peter Pan. Kerry answered an audition call during the planning stages of the film.

The audition, supervised by Disney animator Marc Davis, required her to pantomime the motions that would eventually be animated as Tinker Bell, such as preening in a mirror at her feet. She won the audition and spent the next six months at the Disney Studios on a mostly empty sound stage pantomiming the role on film. The studios provided props as well, notably a giant keyhole mounted on a stand as well as a pair of giant scissors, later used in the scene in which Tinker Bell became trapped in a jewelry box.

Kerry also provided the basis of the red-haired mermaid in the Never land lagoon scenes, with spoken lines. Since Disney released the film at about the time Marilyn Monroe had begun to make an impact, an urban legend immediately sprung up attributing the role to her. While still a teen, Margaret Kerry gained a role as "Sharon" in one of the very first network sitcoms, The Charlie Ruggles Show on.

The show's farewell episode after its five-year run featured Sharon's wedding and honeymoon, a major media event. A voice over talent with a repertoire of twenty-one dialects and forty-eight character voices, Kerry provided the voices (and lips) for characters on 260 episodes of the groundbreaking children's television show, Clut ch Cargo, including major characters "Paddlefoot" and "Spinner". She also provided numerous voices and live-action lead-ins for The New 3 Stooges and Space Angel animated series for Cambria Productions. The item "Dreams Come True Autographed Margaret Kerry Tinker Bell Walt Disney NEW FRAME" is in sale since Saturday, June 8, 2019. This item is in the category "Collectibles\Disneyana\Contemporary (1968-Now)\Animation Art, Cels".

The seller is "toon-city" and is located in San Diego, California. This item can be shipped worldwide.