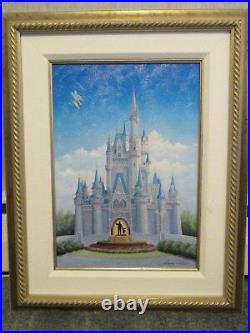 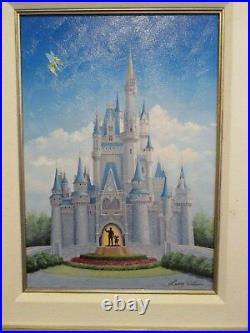 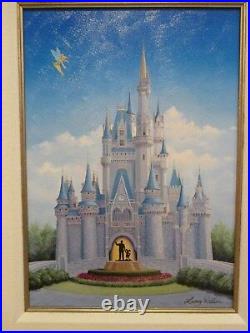 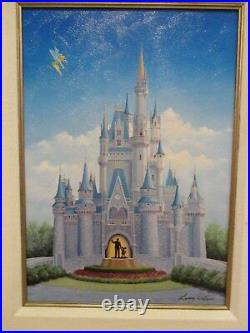 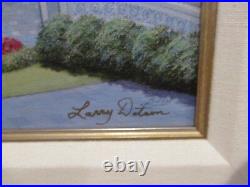 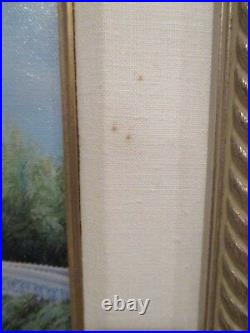 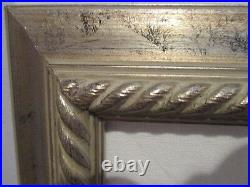 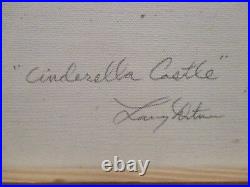 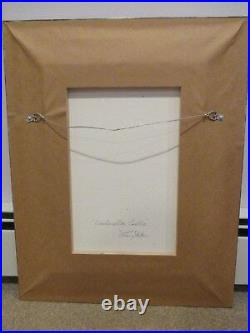 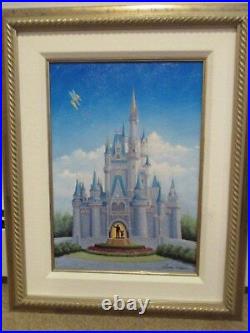 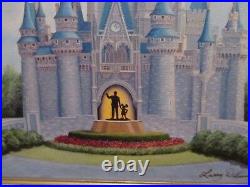 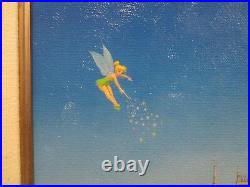 UP FOR SALE IS A GORGEOUS GICLEE THAT WAS DONE BY THE ARTIST LARRY DOTSON. IT IS CINDERELLA CASTLE IN WALT DISNEY WORLD IN ORLANDO, FLORIDA.

IT IS SIGNED BY THE ARTIST IN 2 PLACES. IT HAS BEEN HANGING ON MY WALL FOR ALL OF THOSE YEARS AND NOW IT NEEDS TO FIND A GOOD HOME. A TRUE DISNEY FAN WHO WILL CHERISH IT FOR YEARS TO COME.

MY HOME IS VERY CLEAN, SMOKE FREE AND PET FREE. THE GICLEE MEASURES 10" X 15". THE FRAME IS A VERY PRETTY GOLD COLOR WITH A DISTRESSED LOOK. THE FRAME MEASURES 17 3/4" X 22". THERE IS A PIECE OF OFF WHITE FABRIC MATTING.

IT HAS 3 TINY LIGHT BROWN SPOTS ON IT WHICH CAN BE SEEN IN ONE OF THE PHOTOS. I HAVE NO IDEA HOW THIS HAPPENED AND I DID NOT WANT TO ATTEMPT TO CLEAN IT. IT IS SIGNED BY THE ARTIST LARRY DOTSON IN GOLD ON THE FRONT OF THE GICLEE. IT IS ALSO SIGNED ON THE BACK BY LARRY.

IT IS READY TO HANG. THE GICLEE AND THE FRAME ARE IN EXCELLENT CONDITION WITHOUT ANY DAMAGE. PLEASE NOTE THAT THIS IS NOT A PRINT. HERE IS SOME HISTORY ABOUT THE ARTIST LARRY DOTSON. LARRY DOTSON is an internationally recognized artist who was born in Missouri, and raised in Southern California.

Larry is best known for his oil paintings of coastal scenes and sunsets, golf courses, and most recently capturing the Disney Parks & Resorts in exquisite detail. From the time Larry was in high school he was winning awards for his technical style of architecture and illustrations.

An award from Ford Motor Co. For illustration inspired this artist toward his lifelong dream. With this skill Larry was led into the aerospace industry as an illustrator for North American Rockwell and McDonnell Douglas and years later, Larry went on to open several galleries in Southern California. From 1983 to 1997, Larry showcased his works in his two galleries in Lahaina.

He was chosen by the PGA to illustrate the beautiful 18-hole golf course at Poi'pu, Kauai for the 1997 Grand Slam Event. His golf prints can be found in many pro shops throughout the Hawaiian Islands.

Hawai'i, being the art capital of the Pacific, enabled him to reach clients worldwide. During the time Larry spent in Maui, he was asked to have a one man show in Nagoya, Japan, which gave him international status. Larry and his wife Patti moved to Orlando, Florida in 1997.

He continues to market his works in the Hawaiian Islands, Florida, and nationwide. In 1999, Larry was commissioned to paint the Christmas Tree at the entrance to the New Animal Kingdom Park which started his Disney career. Larry's work can be seen at the Main Street Gallery in the Magic Kingdom, The Art of Disney EPCOT and Downtown Disney, Disney's Animal Kingdom, Disney's Hollywood Studios, Disney Cruise Line, and in various resorts around Walt Disney World and Disneyland Park & Resort. The item "LARRY DOTSON WALT DISNEY WORLD CINDERELLA CASTLE GICLEE SIGNED FRAMED BEAUTIFUL" is in sale since Monday, January 21, 2019. This item is in the category "Art\Art Prints". The seller is "dizqueen" and is located in East Northport, New York. This item can be shipped to United States.