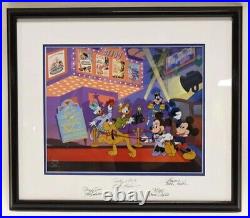 The sericel is matted, with an opening of 15" x 12"; mat is hand-signed by voice artists Tony Anselmo (Donald Duck), Bill Farmer (Goofy and Pluto), the late Wayne Allwine (Mickey Mouse), and Russi Taylor (Minnie Mouse), all Disney Legends. Framed with Plexiglas for an overall size of 23" x 20". A Disney COA is attached to the back of the frame. This item is in the category "Collectibles\Animation Art & Merchandise\Animation Art".

The seller is "kesone_87" and is located in this country: US. This item can be shipped to United States.