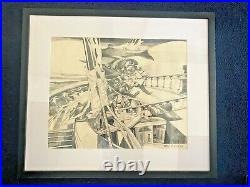 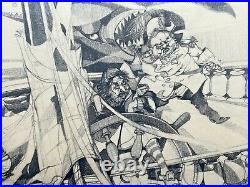 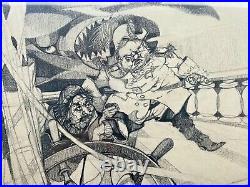 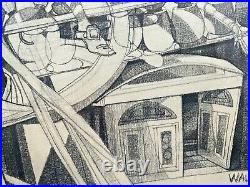 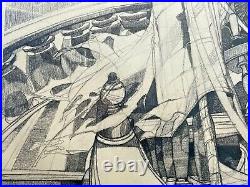 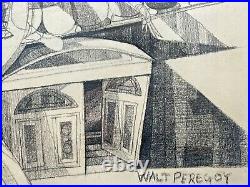 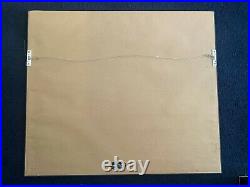 Walt Peregoy was an amazing Walt Disney artist and contemporary of Eyvind Earle. Walt was "a perfect storm" in his life and his amazing work, he had an uncanny sense of shape language and symmetry that was unmatched. A true, un compromised artist that painted backgrounds on Disney's masterpiece "Sleeping Beauty", "101 Dalmations", "Jungle Book", among others.

Also created art for Walt Disney World's EPCOT Center. I bought this framed, signed, original charcoal pencil drawing on paper (13.5" by 16.5" image area, framed 20.5" by 23.5") at one of his shows in the later years of his life because this work really showed off his compositional mind and sensitivity. Not a reproduction or print. The complexity is incredible, (the tattered sails and flag) yet I'm not sure when it was done and not aware of any film development connection although there could be. It stands up to close inspection and gives you something every time you study it. The violence in the storm, the Sharks! This pencil drawing excels in that you sense his hand, appreciate his gradients, delicate sense of tone, and line weight that heavy handed screen prints lack.

Like Vinyl versus a CD, it's great with a glass of wine. Peregoy was born in Los Angeles.

He spent his early childhood on a small island Alameda, California. He was nine years old when he began his formal art training by attending classes at the California College of Arts and Crafts.

At the age 17 Peregoy dropped out of high school and went to work for Disney as an in-betweener. In 1942, he joined the U. And served for three years in the Infirmary as a 1st Class Petty Officer. After World War II he continued his art education, studying at the University de Belles Artes, San Miguel de Allende in Guanajuato, Mexico, and with Fernand Léger.

Although skilled with these more conventional projects, Peregoy's personal style began to surface. Peregoy's unique style began to meshed well with that of his contemporary, stylist Eyvind Earle. Peregoy and Earle's work on Paul Bunyan.

(1958) was nominated for an Academy Award. Their unique style of animation on Paul Bunyan was a departure for Disney. Peregoy continued to work at Disney for an additional 14 years. Peregoy was lead background painter on Sleeping Beauty.

(1959) before embarking on the most ambitious, intelligent, and personal effort, his work as color stylist and background artist on One Hundred and One Dalmatians. (1961), and The Sword in the Stone. He later worked on Scooby-Doo, Where Are You! (1969), and other series produced by Hanna-Barbera. In Florida, where his influence included architectural facades, sculptures, fountains, show rides and murals for The Land.

(formerly The journey into the Imagination) pavilions. Eyvind Earle and Joshua Meador. Peregoy was one of the featured artists in Disney's Four Artists Paint One Tree documentary.

He has also participated in group shows at: National Gallery of Art. And the Corcoran Gallery of Art in Washington, D. He taught Background Styling at Brandes Art Institute from 19841985 as well as Principle of Drawing.

In the last years of his life, he continued to draw and paint in the Los Angeles area. Peregoy died on January 16, 2015 at the age of 89.

The item "Rare Walt Peregoy Original Pencil Drawing. Disney Animation Artist" is in sale since Tuesday, May 18, 2021. This item is in the category "Collectibles\Animation Art & Merchandise\Animation Art". The seller is "eddieswank" and is located in Los Angeles, California.