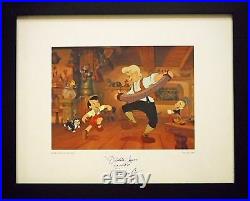 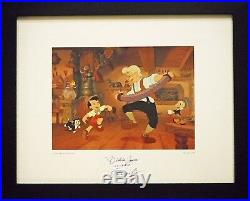 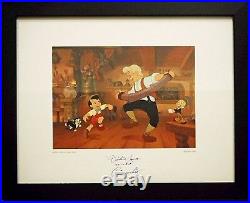 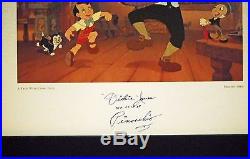 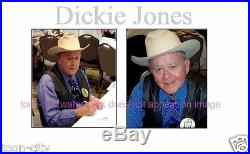 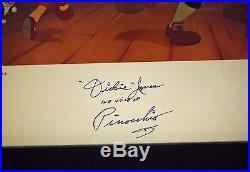 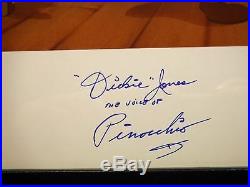 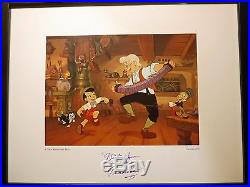 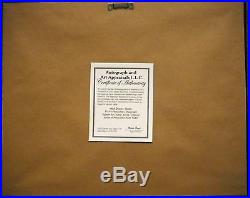 This 11 x 14 inch print is a professionally produced image taken from original Production artwork. BONUS: This piece has been hand signed, by the original voice of Pinocchio, in 1939...

Only recently did we frame this print. This NOT a cel, cell, pin or sericel. Images pictured are only representative images, as each piece is individually signed and will be slightly different from one another. Indeed, a unique and rare Disneyana collectible.

Archival Museum Quality Rag-Matt backing. Ready to hang out of the box!

BIO : Dick Jones (born February 25, 1927) is an American actor who achieved some success as a child and as a young adult, especially in B-Westerns and television. He is best known as the voice of Pinocchio in the 1940 Walt Disney film. In 1940, he had one of his most prominent (though invisible) roles, as the voice of Pinocchio in Walt Disney's animated film of the same name. Jones attended Hollywood High School and at 15, took over the role of Henry Aldrich on the hit radio show The Aldrich Family.

He learned carpentry and augmented his income with jobs in that field. Gene Autry, who before the war had cast Jones in several Westerns, put him back to work in films and particularly in television, on programs produced by Autry's company. Now billed as Dick Jones, the handsome young man starred as Dick West, sidekick to the Western hero known as The Range Rider, in a TV series that ran for 76 episodes in 1951 (and for decades in syndication). Autry gave Jones his series, Buffalo Bill Jr. (1955), which ran for 42 episodes on NBC. Jones continued working in films throughout the 1950s, then retired and entered the business world. You'll Treasure this piece forever! The item "Signed Pinocchio Original voice ca 1940 Walt Disney Dickie Jones 11x14 Frame" is in sale since Saturday, June 8, 2019. This item is in the category "Collectibles\Disneyana\Contemporary (1968-Now)\Animation Art, Cels". The seller is "toon-city" and is located in San Diego, California. This item can be shipped worldwide.