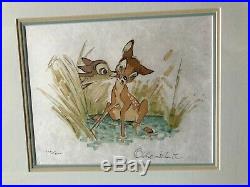 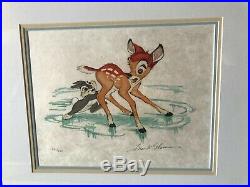 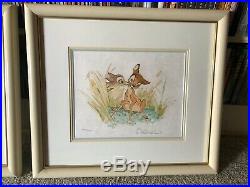 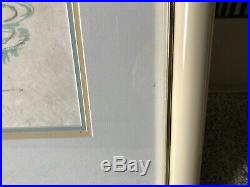 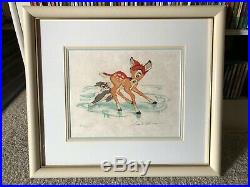 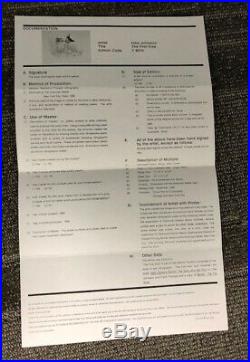 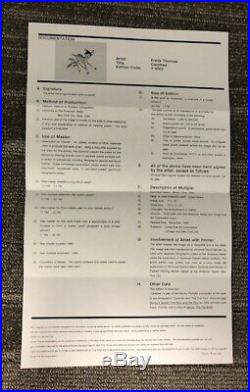 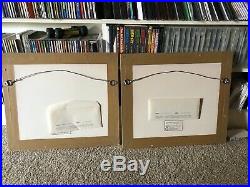 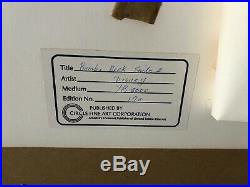 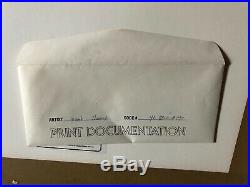 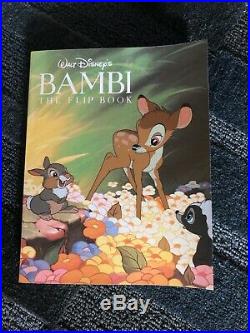 Released by the Circle Fine Art Gallery in 1991, this is Suite II set of 2 lithographs from BAMBI, titled: "Carefree", signed by Frank Thomas - and "The First Kiss", signed by Ollie Johnston. The frames are the original gallery frames.

They were editioned at The American Atelier in New York City 1990. It is embossed with the American Atelier and Circle Fine Art Corporation Logos. It is framed with plexiglass, so it's difficult to get a good photo without lots of reflections. However, I believe you can see the special paper that was used to reproduce the images.

On the COA, which you will receive, it says the paper is "Ungei Heavy", which looks like maybe an upscale kind of rice paper, making it almost translucent in certain light. I can't find any information on "Ungei Heavy". One image might look a bit darker than the other - it's the lighting in my living room. Image size is 7" x 10", Sheet Size is 10" x 12 1/2".

Under the plexiglass, inside, on the "Carefree" image. (I took a picture of it, when I noticed).

And it looks like there's a tiny dot of red paper left on the edge of the gold fillet when it was framed. (See photo) Also included is the small Bambi Flip Book , in as new condition.

The little book is NOT signed. And of course the original COAs for the lithographs are included. Anything NOT mentioned here, is not included. The item "Walt Disney BAMBI LE Framed Signed Lithographs Frank Thomas & Ollie Johnston" is in sale since Sunday, July 5, 2020. This item is in the category "Collectibles\Disneyana\Contemporary (1968-Now)\Animation Art, Cels". The seller is "limerance" and is located in Santa Monica, California. This item can be shipped to North, South, or Latin America.