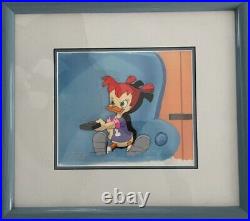 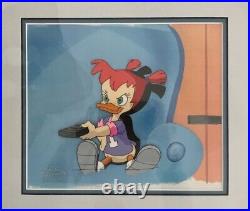 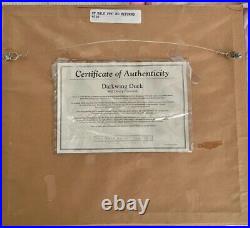 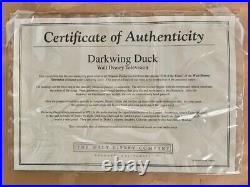 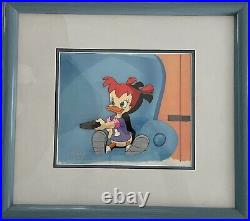 Walt Disney Darkwing Duck TV Production Animation Cel Gosalyn ONE OF A KIND! This is an original one-of-a-kind Gosalyn Mallard production cel from the television show, "Darkwing Duck" in 1991 and is in excellent condition. This is from the episode entitled, Tiff of the Titans. Disney professional framing in a blue tone size 17 x 19.

This one-of-a-kind cel was used in the production of the animated series. Darkwing Duck, which premiered in 1991, is the series starring the caped crimebuster of St. As average citizen Drake Mallard by day and defender of justice by night, Darkwing Duck and his sidekick pilot, Launchpad McQuack, do their best to make the world a safer place. They are joined by Drake's adopted daughter, Gosalyn, and her brainy friend, Honker.

Pictures do not do it justice. Some glare in pictures due to plexiglass. Beautiful cel in excellent condition! This item is in the category "Collectibles\Animation Art & Merchandise\Animation Art".

The seller is "debscollectablesnc" and is located in this country: US. This item can be shipped to United States.