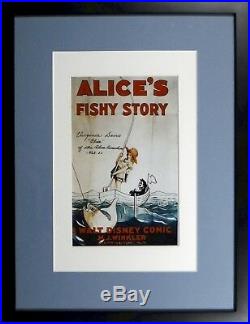 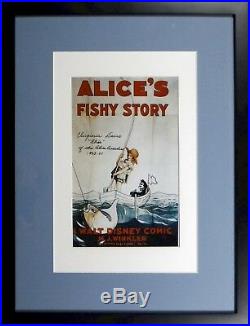 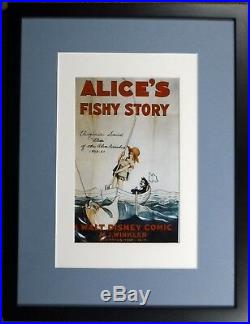 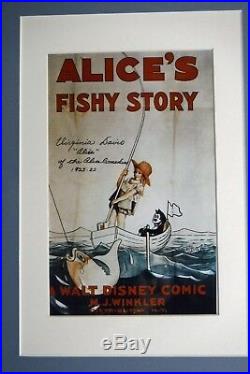 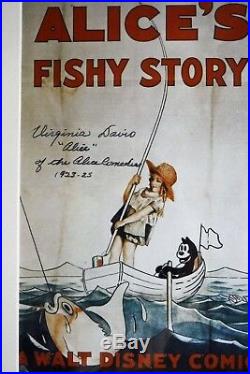 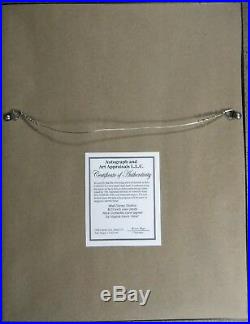 This is a NEW, 8 x 10 inch ALL COLOR photo of the movie poster from " ALICE'S FISHY STORY ". If you are looking for a real piece of history, then this would be a great item for you. BONUS: Virginia hand signed this piece "Virginia Davis "Alice" of the Alice Comedies 1923-25". Autograph was obtained, in-person, at a paid personal signing. You won't find this item at any other Disney outlet.

This is the Mayor's exclusive item. Certainly, a unique and rare Disneyana collectible. This piece is complete and ready to hang! FRAMED: This piece is Framed in a NEW Solid Wood frame. Size is 5.5 x 9 inches with the piece matted up to the edge of the image.

Finished with a metal hanger, protective dust-paper backing. Framed size is 13 x 17 inches. This piece is Ready to hang out of the box! BIO: Virginia Davis(-McGhee) (born December 31, 1918, in Kansas City, Missouri, USA) was a movie actor.

She began working for Walt Disney's Laugh-O-Gram Films as a four year old model in the summer of 1924. Virginia Davis was hired to act in a film called Alice's Wonderland, combining live action with animation. This film initiated a series known as the Alice Comedies, or "Alice In Cartoonland", with later films. Later, she did voice testing for Snow White in the feature film as well as some of the little boys' voices in Pinocchio. The Laugh-O-Gram Studio in Kansas City, Missouri was the a studio where Walt Disney first assembled many the pioneers of animation and is said to be where the concept of Mickey Mouse was born.

After creating one last short, the live-action/animation Alice Comedies, the studio declared bankruptcy in July 1923. Disney then moved to Hollywood, California. Although seen as cute and funny in their time, the Alice Comedies contain content which might be considered surprising and somewhat harsh today. Although Alice is a little girl, she spends much of her time avoiding danger, and even getting kidnapped by the cartoon villains, threatened with such perils as being tied to a log in a sawmill. Although all of Alice's threats are cartoon drawings, some might find the imagery a bit disturbing due to the character's young age, and the fact that she is a real person, or they might find it simply light-hearted and fun, due to the portrayal.