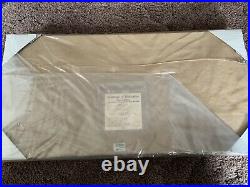 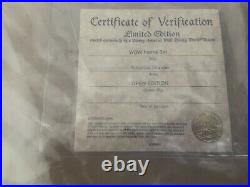 The letters are: "W" with Hitchhiking Ghosts from The Haunted Mansion Attraction; "A" with the Sorcerer Hat from Disney's Hollywood Studios; "L" with Test Track Attraction; "T" with Rock'n Roller Coaster Starring Aerosmith; "D" with Tinker Bell at Cinderella Castle; "I" with Earful Tower from Disney's Hollywood Studios; "S" with Walt Disney World Resort Monorail; "N" with Yeti from Expedition Everest; "E" with Carnotaurus from Dinosaur Attraction; "Y" with Parrot from Adventureland Area; "W" with Tree of Life from Disney's Animal Kingdom Theme Park; "O" with Buzz Lightyear from Toy Story Midway Mania; "R" with Magic Kingdom Railroad; "L" with Splash Mountain Attraction and "D" with Figment and Spaceship Earth. This design however is different than the released park version from 2009 because it was custom framed giving the design a larger frame and purple matting -which is NOT in the original. The Original COA is included however.

The item "Walt Disney World Park Attractions Character Letter Framed 15 Pin Set Custom" is in sale since Sunday, November 1, 2020. This item is in the category "Collectibles\Disneyana\Contemporary (1968-Now)\Pins, Patches & Buttons\Theme Parks\Walt Disney World". The seller is "kjwmom2014" and is located in East Machias, Maine. This item can be shipped to United States.