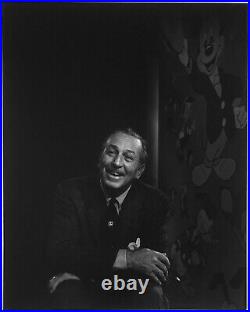 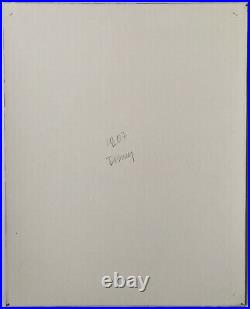 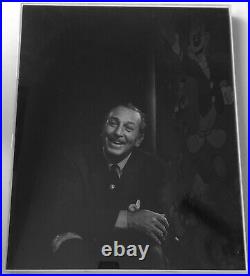 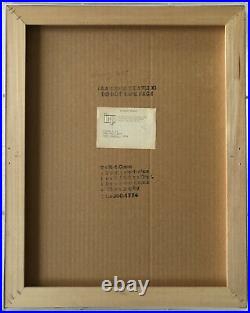 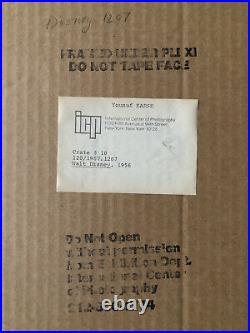 Gelatin silver print, printed c. ICP (International Center of Photography, NY) label on the back of the frame; 1207 Disney handwritten in unknown hand in ink on mount verso. Paper size: 19 ½ x 15 ½ inches, flush-mounted. Frame size: 19 ¾ x 15 7/8 inches (Plexi-glass frame). Provenance: International Center of Photography, NY (Acquisition #120/1987.1207). Similar prints are also in the following museum collections: The Metropolitan Museum of Art, NY; National Portrait Gallery at the Smithsonian; Montgomery Museum of Fine Arts. Yousuf Karsh CC (December 23, 1908 July 13, 2002) was an Armenian-Canadian photographer known for his portraits of notable individuals. He has been described as one of the greatest portrait photographers of the 20th century.

An Armenian genocide survivor, Karsh migrated to Canada as a refugee. By the 1930s he established himself as a significant photographer in Ottawa, where he lived most of his adult life, though he traveled extensively for work.

His iconic 1941 photograph of Winston Churchill was a breakthrough point in his 60-year career, through which he took numerous photos of known political leaders, men and women of arts and sciences. Over 20 photos by Karsh appeared on the cover of Life magazine, until he retired in 1992. By the time of his death, his work was included in numerous museum collections including the Metropolitan Museum of Art, Museum of Modern Art (both in New York), National Gallery of Canada, National Portrait Gallery in London, National Museum of Modern Art in Tokyo, Art Institute of Chicago, Saint Louis Art Museum, Muscarelle Museum of Art, George Eastman Museum, and elsewhere.

In 1987 the National Archives of Canada acquired the complete collection of Karsh items, including the negatives, prints and transparencies produced and retained by Karsh since 1933. The current Library and Archives Canada collection has 355,000 items in its Karsh collection, including all of his 150,000 negatives, kept at a facility in Gatineau, Quebec. The item "Yousuf KARSH Walt Disney, 1956 / Printed 1987 / ICP label" is in sale since Saturday, August 7, 2021. This item is in the category "Art\Art Photographs". The seller is "katrinadoernerphotographs" and is located in Brooklyn, New York.